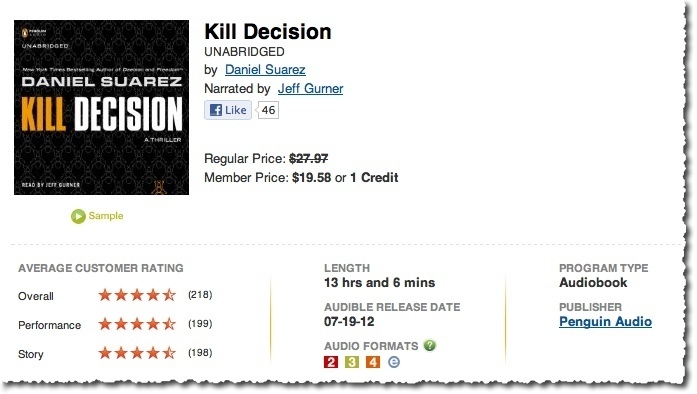 The shocking techno-thriller that cements Daniel Suarez's status as the heir to Michael Crichton and Tom Clancy - a terrifying, breathtaking, and all-too-plausible vision of the world's near future.

Unmanned weaponized drones already exist: they're widely used by America in our war efforts in the Middle East. In Kill Decision, best-selling author Daniel Suarez takes that fact and the real science behind it one step further, with frightening results.

Linda McKinney is a myrmecologist, a scientist who studies the social structure of ants. Her academic career has left her entirely unprepared for the day her sophisticated research is conscripted by unknown forces to help run an unmanned - and thanks to her research, automated - drone army. Odin is the secretive Special Ops soldier with a unique insight into the faceless enemy who has begun to attack the American homeland with drones programmed to seek, identify, and execute targets without human intervention.

Together, McKinney and Odin must slow this advance long enough for the world to recognize its destructive power, because for thousands of years the "kill decision" during battle has remained in the hands of humans - and off-loading that responsibility to machines will bring unintended, possibly irreversible, consequences.

But as forces even McKinney and Odin don't understand begin to gather, and death rains down from above, it may already be too late to save humankind from destruction at the hands of our own technology.

Focus on the process, not the result. Can’t be scared to loose (invest in loss), and can’t let self-worth be wrapped up in success or failure. Competition and achievement have to be balanced by a love of the learning process (for whatever).

All the notes are great, but particularly liked this one...

Thanks Chris, I don't need to read the book now;)

"When the real-estate bubble burst in 2006, derivatives and securities tied to subprime mortgages began to lose value. As it turned out, the fact that the derivatives had spread the risks throughout the system only worsened things. Dubious debt was all over the place, and nobody knew exactly where."
http://www.thedailybeast.com/blogs-and-stories/2009-08-08/jp-morgans-tribal-warriors/2/
[Sent from my iPhone 3GS]
Browse the Archive »